Skip to content scroll to discover more back to top

Mitja Hinderks, Litus Foundation’s founder, has come up with a series of technological innovations to cut greenhouse gas emissions, all of which would lead to major energy savings. The key innovation, on which much of the Foundation’s efforts have so far been devoted, is the development and world-wide commercialization of uncooled internal combustion engines (ICEs) for all applications and fuels.

Alongside the breakthrough technologies behind the Litus engine, there are three other significant groups of innovations in the areas of: Continuously Variable Transmissions (CVTs); Commercial Hydrofoil & other Marine Craft; Hybrid-Drive & other Aircraft.

Between 35% and 40% of man-made CO₂ comes from all ICEs used in vehicles, ships, electricity generation, rail and industrial / agricultural equipment. Today, piston engines dissipate (waste) 30% to 50% of fuel energy via air- or water-based cooling systems and general radiation. This is unsustainable.

Uncooled internal combustion engines are for applications in every industry and for all current fuels, including hydrogen and ammonia. Compared to today’s cooled engines, they would have about twice the efficiency (using half the fuel); be many times smaller and lighter; virtually silent; simpler and more reliable because they would have far fewer moving parts; have no cooling or piston / cylinder oil systems to fail nor toxic fluids to dispose of. They would about halve CO₂ emissions, greatly reduce emissions of particulates and NOx so improving health wherever used. Much lighter engines and less-needed fuel will provide longer operating ranges for cars, heavy goods vehicles (HGVs), rail, ships and aircraft.

It will be a long time before green fuels such as hydrogen and ammonia and their infrastructures will be widely available. Today, there are few alternatives to fossil fuel use for ICEs in heavy vehicles; rail; shipping; aircraft; mining, and agricultural / industrial equipment. Nearly all these applications are switching to hybrid drives, which need no new infrastructure, use far less batteries, and are for all countries and terrain. Only some light vehicles could be all-electric. With their charging systems and added electricity generating requirements, they are mostly not affordable or practical in many less-developed countries. 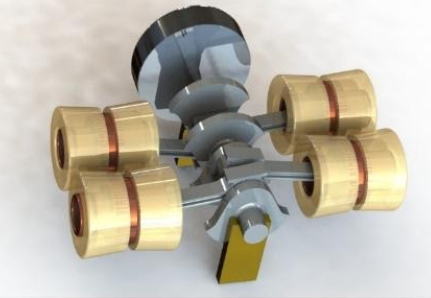 Uncooled engines will run at very high pressures and temperatures, enabling more fuel energy to push the piston (according to the Carnot rule), with the rest held in the much hotter exhaust gas where it can be retrieved to do more mechanical work and increase performance, using current exhaust heat energy recovery technology.  Because of the high temperatures, the traditional piston / cylinder oil system is not usable.  Instead, the components are separated by gas bearings, a well-known technology.

Pistons and cylinders of industrial ceramic are in heavily thermally / acoustically  insulating casings.  Typically, an electrical generator would be coupled to the engine inside the casing to make a gen-set.  With no plumbing for cooling or for piston-cylinder oil systems, engines can be ’snap-in’ cartridges.  Equipment no longer needs to be towed to a repair facility; engines can be replaced onsite, a game changer.  Litus has solved earlier problems on use of ceramics in engines.

Efficiencies for uncooled engines of all size ranges will be between 47% and 50%, without using an exhaust heat energy recovery system (EHERS).  In contrast, smaller engines today have real-world efficiencies of 5% – 15%, with larger ones – often using some exhaust energy – generally having real-world efficiencies in the 25% – 40% range.  Adding EHERS to uncooled engines can boost efficiencies to the circa 70% region, depending on number and type of EHERSs used.   Multiple EHERSs are practical in rail, marine and stationary engine applications.

Litus is seemingly alone in working on uncooled engines; they do not exist anywhere yet.  It is one of the few projects that would quickly slow global heating.  Once available, uncooled engines – with their many advantages including halved fuel costs – could almost completely replace today’s cooled piston engines, cutting global man-made CO2 by roughly 20% within a decade or so, 30% if largely using hydrogen and / or ammonia.  In 2017 the global piston engine market was worth $660 Billion.

An illustrated description of a key version of the Litus uncooled engine is an Appendix to the Business Plan.