Skip to content scroll to discover more back to top

What follows is a schematic outline of one of several embodiments of Litus uncooled engines.  The construction details that are being developed are still confidential. As there is no engine cooling other than the incoming air, uncooled engines will run at temperatures and pressures about two times greater than those of today’s engines.

Key components will be of industrial ceramic materials able to withstand much higher temperatures than today’s metals.  For uncooled engines, the fuel – liquid or gas – will be delivered via direct injection (as in diesels) just prior to combustion.  It cannot be pre-mixed because the super-hot chamber walls would cause pre-ignition (knocking).

Figure 1 shows a schematic of one layout. A hollow piston/rod assembly (green) reciprocates inside a cylinder assembly with closed ends / heads (red) separating two toroidal (doughnut shaped) combustion chambers operating in two-stroke mode, all in a thermally and acoustically insulating casing (blue). Air is supplied via charge volume(s), which could house a crankshaft or a generator – both in dashed outline – or any other equipment, such as a fuel delivery system. The piston assembly has a circumferential projection or flange – the piston part – on the middle of a hollow rod. Air goes from the charge volume through the hollow piston to the combustion chambers via a series of ports. Exhaust exits via a series of ports in the middle of the cylinder, to a surrounding exhaust gas processing volume.

All engines today have blow-by, a thin film of gas moving down the gap between piston and cylinder from the high pressure combustion chamber to the low pressure zone at the crankshaft / oil sump. The blow-by can be adapted to form a gas bearing – a widely established technology although never before used in internal combustion engines (ICEs) – to replace the oil that would otherwise boil away at the new very high temperatures. For that to work, today’s side- thrusts on the piston must be significantly reduced, for example by using sleeve bearings or rollers outside the cylinder assembly, as indicated schematically in Figure 2. 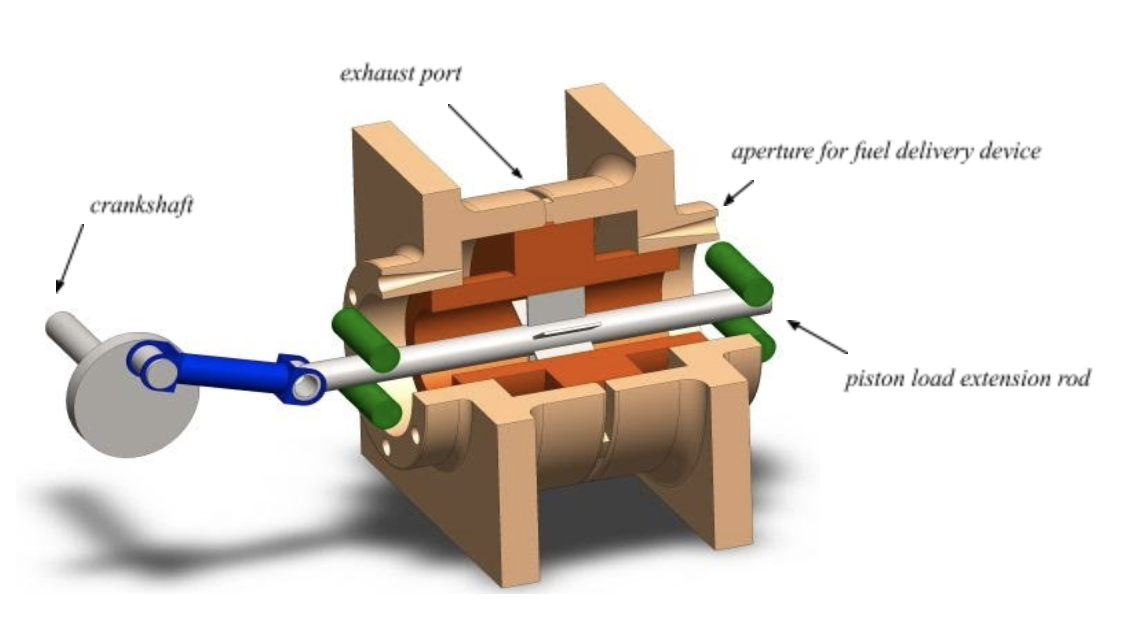 Figure 2 shows a schematic view of the cylinder assembly with piston/rod (same ceramic material but coloured differently for clarity) at center of reciprocation. Identical cup-like cylinder / head portions are mirrored about spacer pieces, their gaps forming exhaust ports leading to the surrounding exhaust processing volume (not shown). There are six recesses for fuel delivery equipment (not shown). A shaft mounted in the piston’s interior and here located by rollers placed outside the piston / cylinder assembly transmits power out.

Expansion in one chamber imparts kinetic energy to the piston, partly given up in compression in the other chamber. Only net work is transferred to the crankshaft, reducing component masses and bearing loads. Toroidal volumes require multiple fuel injectors; they are cheaper than more pistons and cylinders.

Figure 4 shows in outline what such an engine might look like. The piston/rod assembly may be coupled to a crankshaft driving a rotary generator/starter-motor, or another device. Often rotary motion is not needed; the piston rods or extensions can be coupled directly to compressors or pumps or reciprocating electrical generators, optionally within the insulating casing. 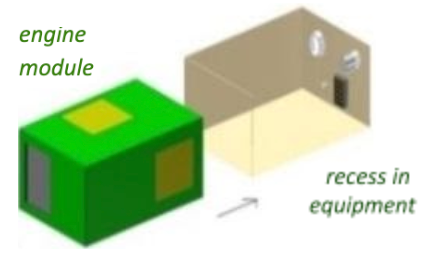 The schematic layout of Figure 1, operating with twin two-stroke combustion chambers in one cylinder – four combustion events every two revolutions – and showing around four base moving parts is an equivalent of a current four cylinder four-stroke engine, which has well over twenty base moving parts. There are no valves, camshafts, rockers, and it would be challenging to simplify the engine further. Most uncooled engines will have only one cylinder.

With no piston / cylinder oil system or cooling system plumbing, nor the need to circulate air round a metal block, engines in insulating casings could be “snap-in” units. A generator could be included in the casing. Figure 4 shows a sketch of a casing, with a grille for air in. The recess in which the casing fits has connections for exhaust out, fuel in, electronic controls, and drive shaft or electric power out. Because they would be so light, engines could be changed in minutes. 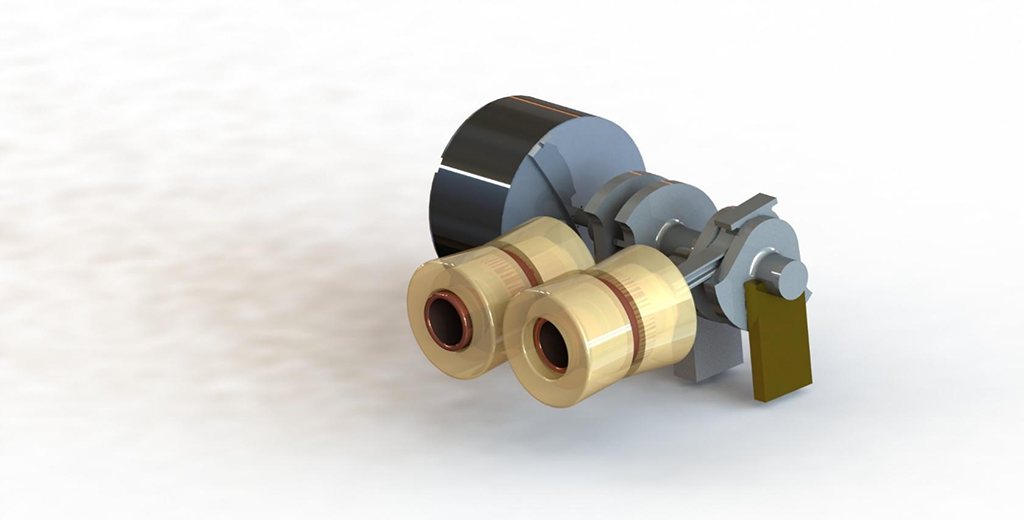 Shown above in Figure 5 is a very schematic illustration of a two-cylinder / four combustion chamber assembly with crankshaft and generator. The cylinder with a central port is in two parts, both located together by a linking structure. The piston (brown) is just projecting out of the furthest cylinder. Linking structures are not shown, nor are the casing, cylinder insulations, exhaust / charge processing volumes, fuel delivery and exhaust emission systems.